It was a frozen winter dawn! The Charlie company of the 13th Kumaon Regiment led by Major Shaitan Singh Bhati was keeping a calm vigil over the Rezang La pass … their objective was simple …. Hold on to Rezang La at any cost … not many days ago they were brought in from Leh and within couple of days these soldiers established their morchas along the 2km long ridge overlooking Rezang La pass. Shaitan Singh’s radio operator Ramachandra Yadav was struggling to keep his vintage radio; warm and working with the little heat his icy fingers and damp cotton sleeves could generate. He kept his company commander updated of every little piece of information that came from his forward positions.

Major Shaitan Singh had built a diamond like formation to shield the ridge from any advance that could have come from any gulley leading up to the mountain top. Platoon no. 9 was in the front flanked by platoon no. 7 and platoon no. 8 slightly higher on left and right. Major Shaitan Singh and his section had set up a command post on the mountain top with a light machine gun manned by his body guard Nihal Singh positioned to protect this morcha. 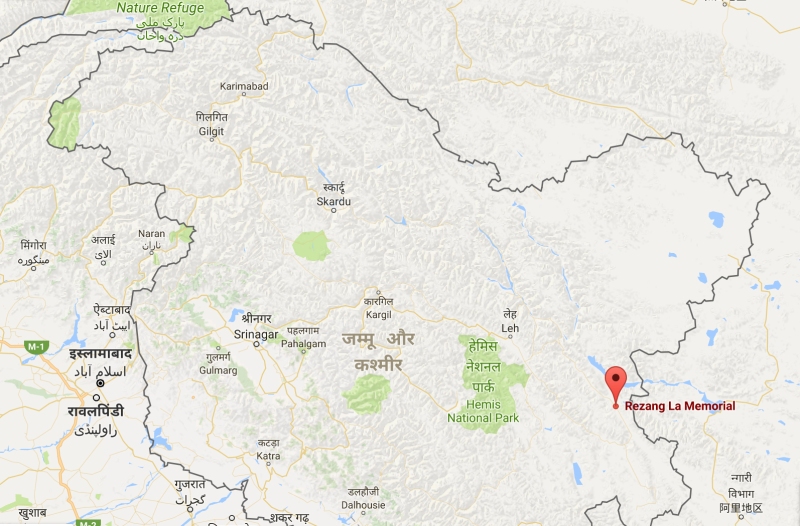 Indians expected the Chinese to launch an offensive before dawn to take advantage of poor visibility but much of the night passed in an uneasy calm. The silence was broken at half past three when Gulab Chand’s platoon no. 8 opened fire and confirmed on radio that they have spotted enemy troops trying to climb through nullahs. The radio contact with platoon no. 8 was soon lost and focus moved to Surja Ram’s platoon no. 7 who alerted the command post about 400 odd Chinese soldiers trying to encircle their position. After an hour long exchange of fire that ensued between platoon no.8 and the Chinese the first wave of attack was repulsed. Surja Ram’s platoon no. 7 opened fire only after the Chinese aggressors came within the 300 yard range effective range. Indians used machine guns and mortar fire effectively and the second wave of attack was neutralized. Both the nullahs were littered with the bodies of the Chinese soldiers.

Every Ahir jawan now was waiting for more action … with hands on triggers and attention on their gun sights they awaited the third wave of Chinese attack … at daybreak around 0500 hours hundreds of Chinese were seen swarming up through gorges moving towards Indian positions in a daring frontal attack with numerical superiority. They simultaneously climbed towards platoon no.7 and 8 and left platoon no.9 alone to be encircled later. Major Shaitan Singh ordered his troops to bring enemy under accurate mortar and LMG fire. Even the third wave of attack was routed … twenty odd Chinese soldiers who managed to reach Indian bunkers were killed in hand to hand combat.

The Chinese by now realized that Rezang La was no cake walk. They re-organized and reviewed their attack strategy. Indian troops had moved in just a few days ago and did not have sufficient time to lay mines and build strong bunkers. The mountain feature behind Indian positions meant that Indian artillery guns could not be used to provide firepower to our defensive positions. The Chinese brought in their heavy guns and 75 mm recoilless guns to attack Indian positions relentlessly. Major Shaitan Singh’s command post was blown apart by a 132 mm rocket fire. He moved outside his destroyed morcha and started moving between his platoon positions to motivate and direct his men. He was seen shouting, “Dada krishan ki kripa hum pe hai … ye din firse nahin aayega …. ham ko kaha gaya hai ki zaroorat pade to withdraw karo … lekin hum sab ahir yadav hain … Rezangla ko nahin chhodenge … Bane raho … Ladte raho”

On the upper side of the ridge 700 odd soldiers were spotted … Ahirs thought it was the Alpha company of 13th Kumaon sent for reinforcement … but when about 15 odd yaks carrying machine guns emerged … Company Havildar Major Harphool Singh realized that Chinese soldiers had encircled them completely … Major Shaitan Singh ordered platoon no.9 to target the enemy reinforcements before they could settle. He was moving towards platoon no.8 when a burst of LMG fire injured and broke his hand completely … undaunted by the injury he kept moving from one gun position to another and kept regrouping and realigning his defences against inexorable Chinese offensives.

Platoon no. 7 was now dwindling in numbers and enemy overran many of their positions. Jamadar Surja Ram came out of his morcha and killed 6-7 Chinese with his bayonet before falling to enemy automatic weapon fire. The Chinese now dispersed over platoon no.7 who had no survivor barring Naik Sahi Ram who moved away with his light machine gun and kept attacking the Chinese with accurate fire. He too ran out of ammunition and was neutralized by enemy RCL gun. In his dying moments he broke his light machine gun with a boulder and threw it in the gorge.

Naik Singh Ram of platoon no.8 was a wrestler with raw power. When he ran out of ammunition he charged out of his position and took on the Chinese in fierce hand to hand combat. He realized his bayonet had become too blunt and it couldn’t pierce the thick leather coats of the Chinese infantrymen. He choked a couple of Chinese to death and killed another too by smashing their skulls against boulders before he was silenced.

Naik Ram Kumar who was manning the three inch mortar kept firing till he ran out of shells. He destroyed his mortar gun and his fire plan and then ran to an empty Indian position and began fighting with a 0.303 calibre rifle. Ram Kumar managed to kill many Chinese before he was wounded by a grenade blast. Weakened by bleeding he fell unconscious.

Major Shaitan Singh was organizing his diminishing assets as one Ahir Jawan fell after other. Unmindful of his profusely bleeding broken arm he kept motivating his jawans, helped them reload their guns and kept their morale high. Around 0700 hours a Chinese Medium Machine Gun spotted him and directed a burst of fire at him. He was hit in the abdomen and was rescued by Phool Singh and Jai Narain. Sensing danger to their lives he ordered them to leave him behind a boulder and escape to Battalion HQ. Havildar Major Phool Singh kept fighting with three survivors in his platoon till he ran out of his bullets.

Shaitan Singh’s radio operator Ramachandra Yadav tried to crawl with his wounded commander but soon realized he was dead. Shaitan Singh’s wrist watch that ran by his pulse had become dead at 0815 hours. Ramachandra Yadav managed to reach his company HQ which he saw was set ablaze by his retreating CQM.  Some of his superiors refused to believe that 120 odd soldiers could kill 1300 odd Chinese aggressors. He was told he was crazy and could be tried for court martial. The Chinese announced unilateral cease fire on the 20th November 1962 and it was assumed that entire Charlie company was wiped out. Nihal Singh escaped from the clutches of Chinese sentries after sunset and return after a long arduous trek. The martyrs of Rezang La were cremated with full state honour in Chushul, Major Shaitan Singh’s mortal remains were flown to Jodhpur in a special plane and he too was cremated with state honour in his home town.

Three months later in January 1963; a Ladakhi shepherd wandered over Rezang La and was astonished to see 96 frozen dead bodies … preserved frozen in the moment by sub-zero temperature. Joint red cross mission went to the spot to recover these bodies. They were stunned to see the spectacle of frozen dead bodies of soldiers holding on to their weapons tightly … Nursing assistant Dharam Pal Dahiya had nursed and bandaged 32 of his comrades that night and died with a syringe and bandage in hand. Empty boxes of bullets and empty magazines told the tale of their last man last bullet stand.

The Chinese overran the defence of Rezang la but they paid a very heavy price for this attack and did not press further towards Chushul after losing more than 1300 of their men.. They marked their respect for the way their Indian enemies fought by covering some dead bodies with blankets. Near Singh Ram’s body they had fixed a bayonet and a helmet and pinned a note … here lies a brave Indian soldier. 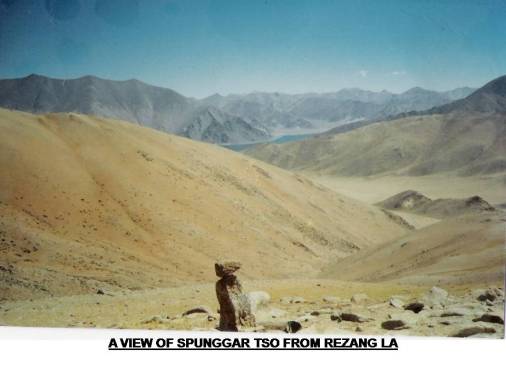 “How Can A Man Die Better?

For The Ashes Of His Fathers,

And Temples Of His Gods.”

Built by all ranks of the 13th Kumaon