Lord Buddha gave his first sermon at Sarnath… a town few km away from the cultural hub of Hinduism and perhaps the birthplace of a civilization several centuries old. Not too far is Singhpur .. home to the 11th Teerthankar of the Jains … Shreyanshnath. Gautam Buddha called this place Isipatan and it is considered an important pilgrimage centre for the followers of Buddhist faith. Lets see a visual travelogue of Sarnath. 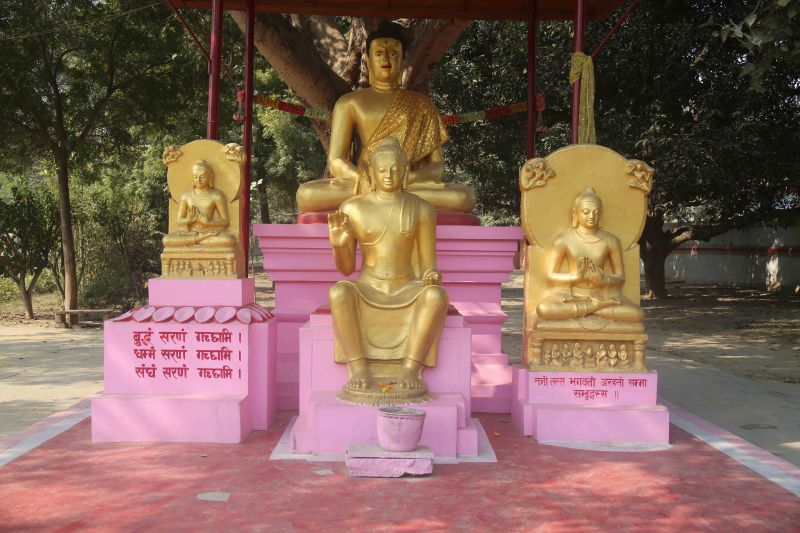 After attaining enlightenment at Bodhgaya under a Banyan tree, Buddha came to Sarnath and gave his first sermon to first five pupils or companions. Details of this sermon can be found in a Kushana period document. Buddha told about the four noble truths and gave the path to Nirvana or Moksha through Ashtanga Marga. Yasa was son of a rich trader in Varanasi and he joined Buddha with his 54 followers. Thus the first Sangha of 60 monks was formed here in Sarnath.

Before we board our time machine and go back into the past of these monuments, let us understand the current connect they hold with our present. Our national emblem Ashoka Stambha was taken from the Lion Capital built over an Ashokan Pillar here. We can see the capital inside the Sarnath museum under the ASI. 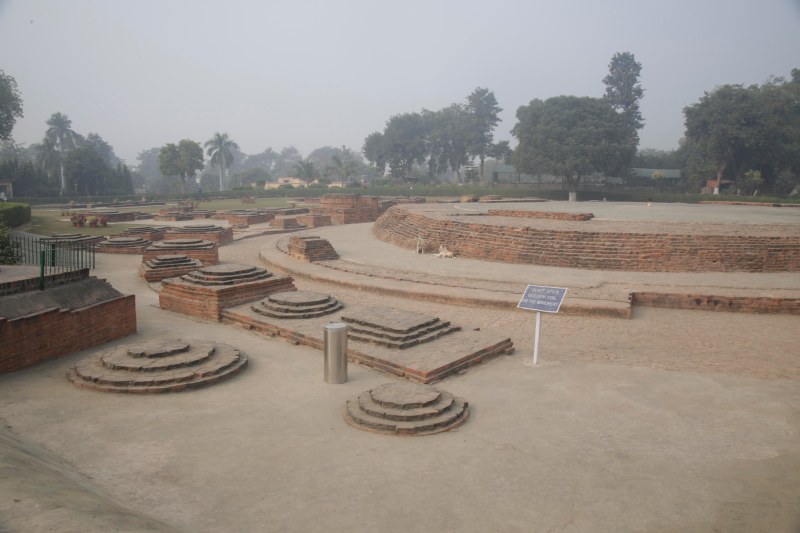 There was a huge stupa by the name Dharmarajika stupa … which was broken by Dewan Jagat Singh in the 18th century to obtain building material according to a reference. During the excavation conducted by Cunningham several important artifacts were found. There were several stupas, Viharas, monasteries … It was a foggy morning and I decided to come again. Actually it is always good to spend a whole day at such monuments because the buildings interact differently with sunlight throughout the day. 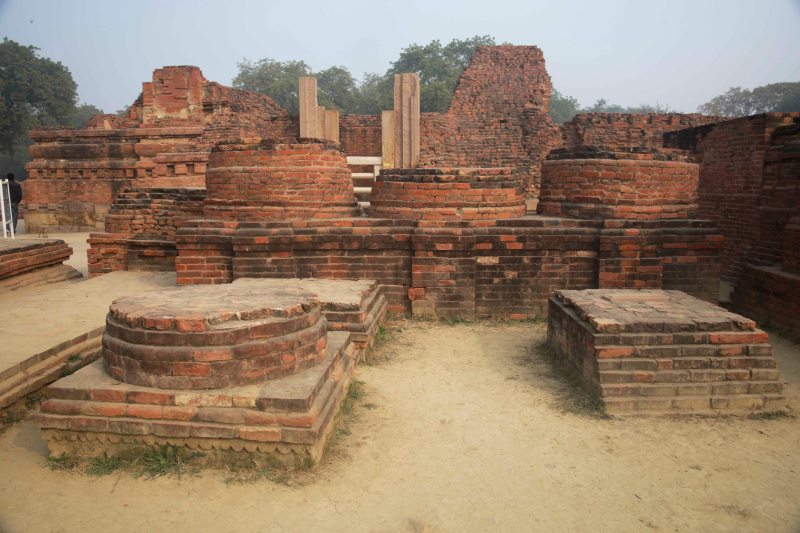 Mulagandha Kuti was the original main shrine here. According to Xuan Xang this grand monument was 60 meters or more than 200 feet in height. A Gupta period tall standing Buddha was found in the southern direction of the main shrine. Today, a new building has been built and it is known as Mulagandha Kuti too.. this is used for prayers and other religious rituals to be performed.

The tallest monument at Sarnath standing today is the Dhamek Stupa or the Dharmachakra stupa. The stupa is almost 44 meters in height and about 28.5 metres in diameter. Various geometric patterns carved on the Stupa evoke curiosity and awe.

Gupta carvings on the Dhamek Stupa

Cunningham bored through the stupa in search of relics. A slab with engraving was found which was recorded and inserted back to the Stupa. The carvings on the stupa represent the Devadushya cloth… a testimony to superior carving skills of the artisans in the Gupta era. 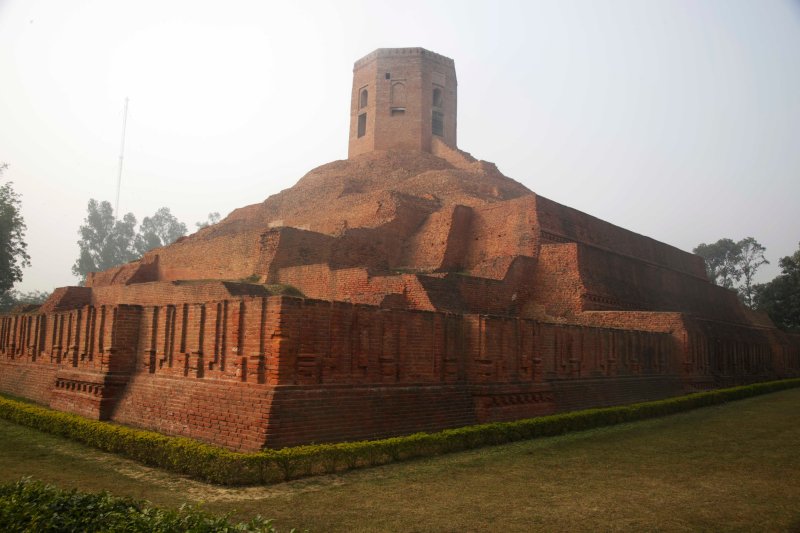 A km away from the Dhamek stupa and the main site we see another huge stupa with an octagonal tower on the top. It has a unique and attractive form. This is the Chaukhandi stupa built in the Gupta era… it was once a terraced temple. 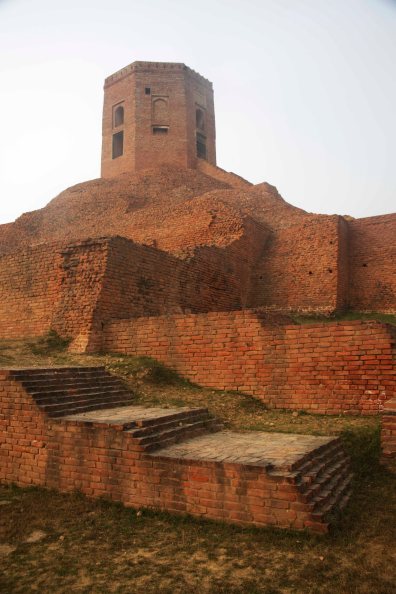 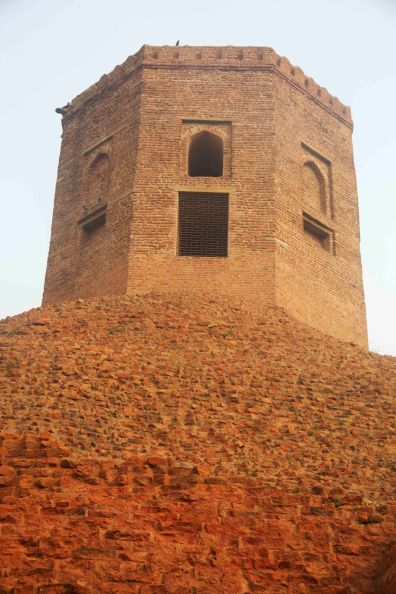 However, the octagonal tower on the top is a Mughal era addition. Built by Govardhan, the son of Raja Todarmal to honour Humayun who visited the location for a day. 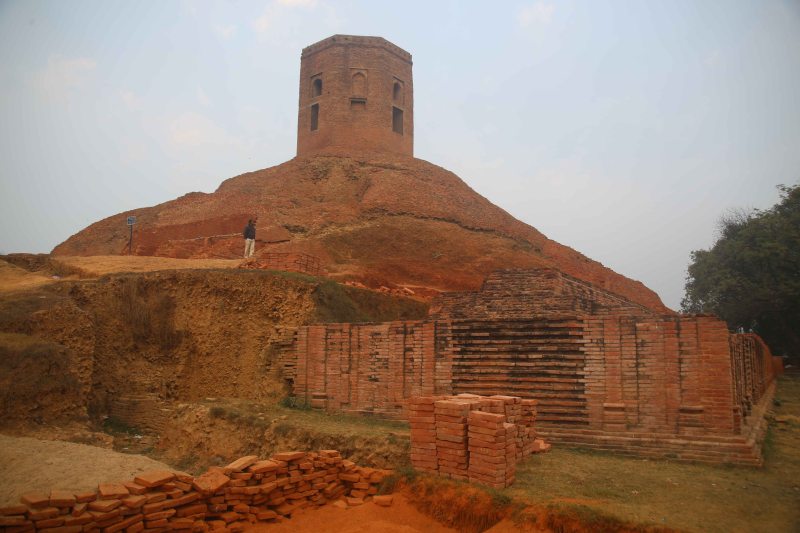 So a two year old trip has finally made it to the blog … I think the guidebook and pictures in my hard disk were waiting to be used … The next in line is another Buddhist monument .. right inside the heart of our country … Sanchi … followed by a cave art monument going back several thousand years … Bhimbetka… Hindustan ka Dil Dekho!