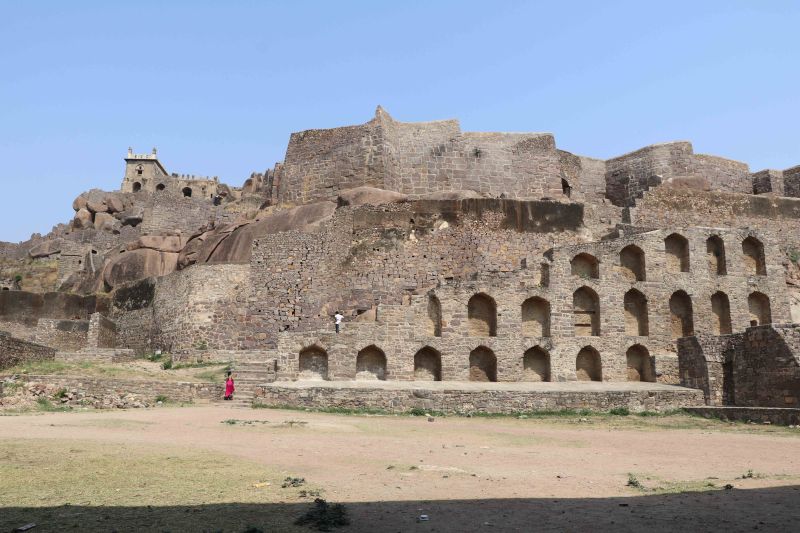 View of Bala Hisar citadel from the base

“Oh Wow! You travel so much for your job … you are damn lucky! You get to visit and explore so many places in India and abroad!”

I have heard this line so many times! It is true that I travel a lot! Lets say about 110 days a year … and last year it was down to 87 days … but it is still quite a bit of traveling by normal standards! Whether I am doing sports production or conducting fieldwork for a design research assignment I have to be on the field.

Do I get to explore a lot? Well Yes and No. I definitely get to interact with different people with different ideas, exposure, accent and cultural temperament. However, we rarely get time to visit places of interest. So when assignment allows such explorations I try my best to make the most of it.

Carvings on the entry gate

Between 2014 and 2017, I think I have been to Hyderabad at least 8-9 times. But saw very little of this Deccan wonder! Well almost nothing apart from the Charminar. So when I had a chance to check locations for a TV feature shoot, I decided to drive to Golkonda fort. I am usually very enthusiastic when it comes to location recces … but it is difficult to keep the spirits alive in this heat wave. Perhaps getting roasted even in 8 am sunlight is a Deccani summer experience.

The fort was built during Qutbshahi’s formative years. The outer walls has a striking similarity with respect to Devagiri-Daulatabad fort ramparts. The citadel of the fort is known as Bala Hisar. After carefully seeing the first entry gate … a long gradual climb takes you to the top of the fort in about 20 minutes. One encounters several interesting stone structures on the way up.

These long corridors under stone arches once housed administrative offices by the famed ministerial duo Akanna and Madanna … The fort was built by Kakatiya dynasty and became a part of the Bahamani kingdom till Qutbshahi dynasty took over and consolidated their hold.

Massive granite walls give a rough and tough feel to the landscape … especially the raw texture that builds stunning contrast against the bright blue skies. 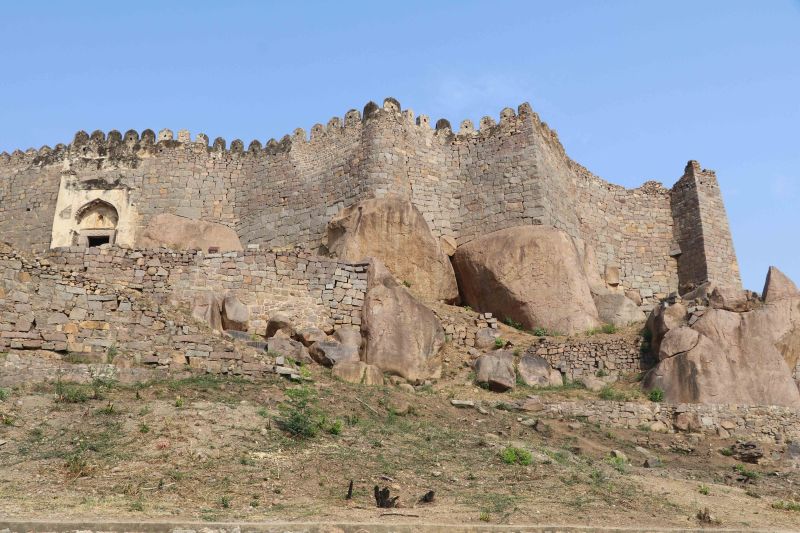 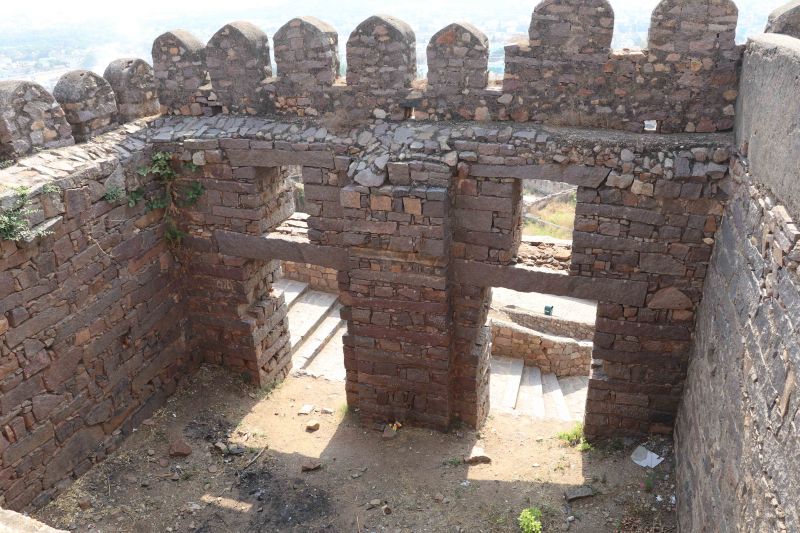 After the climb flattens up a bit we see a huge granary at the base of the citadel followed by the Ibrahim mosque. The design of mosques in this area is the same with improvisation on carvings and latticework to add an element of variety.

When you climb about 300 steps and reach the top the simple cooler water tastes really sweet … as refreshing as a Starbucks frappe! Especially if its 40 degree summer time. Fortunately there is cool breeze which has a soothing effect …. On the horizon you can see contemporary housing towers rising up tall … interacting with the granite walls of the fort and domes of the Qutbshahi tombs reminding us of the fort’s glorious past.

The old and the new

On the top of the citadel there is a rectangular building standing structurally intact … but mutilated, defiled by hooligans who like to leave their names everywhere.  From the terrace whole of Hyderabad is clearly visible … towards east we can also see other palaces and structures inside the Bala Hisar fort.

As you climb down towards the base again … it is worth checking out the size and scale of massive granite boulders that make man made walls look tiny (even those 40 odd feet in height) One climbs down through a steep but comfortable stairway … it is important to hold the side wall because the stone is extremely slippery at some points … but it is a safe path. Through various arches we finally reach the base point near the Janana masjid. 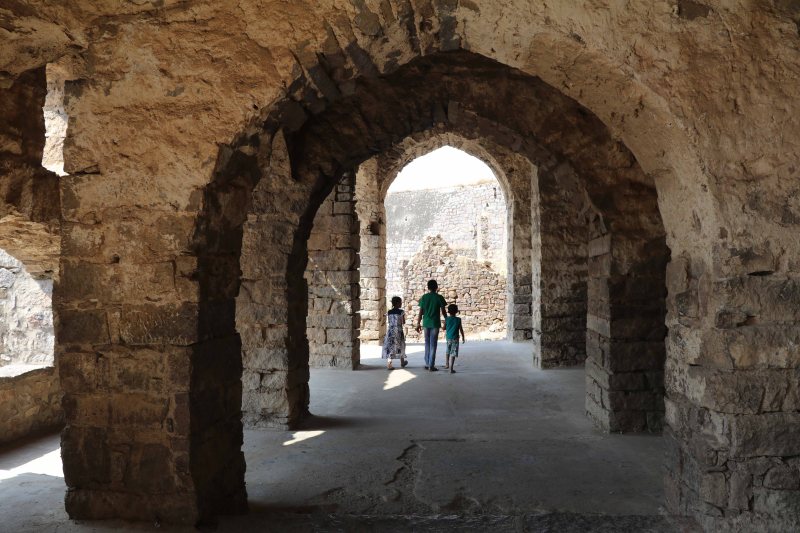 I was quite thrilled to see this 12 year old boy looking after two younger siblings and showing them everything while explaining as much as he could … his parents could not climb the fort! As you pass through majestic structures like the Rani Mahal and Nagarkhana … sunlight plays hide and seek … mostly diffused and harmless. 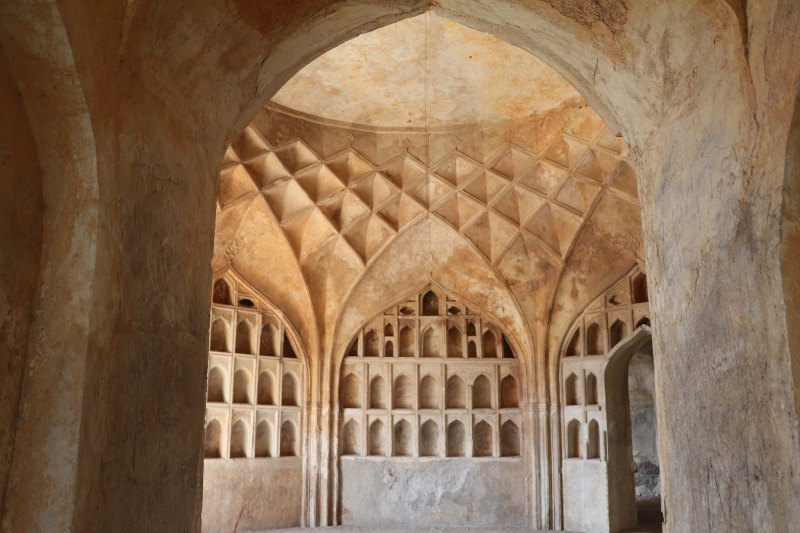 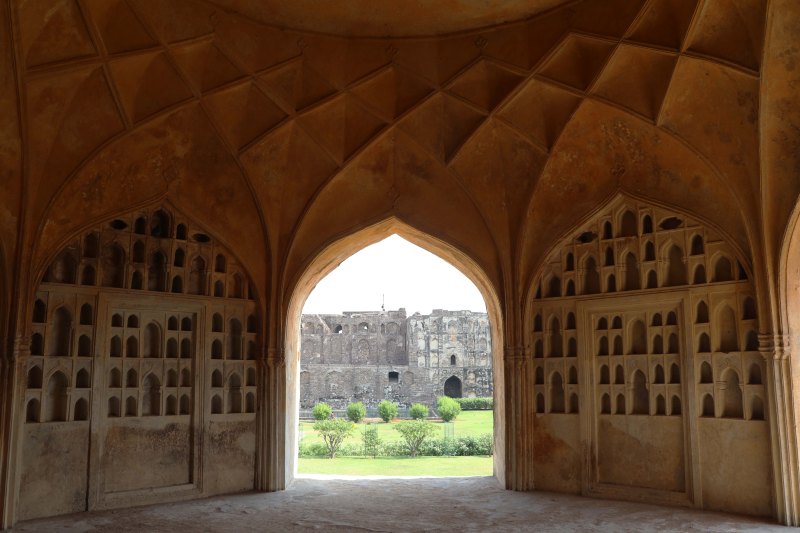 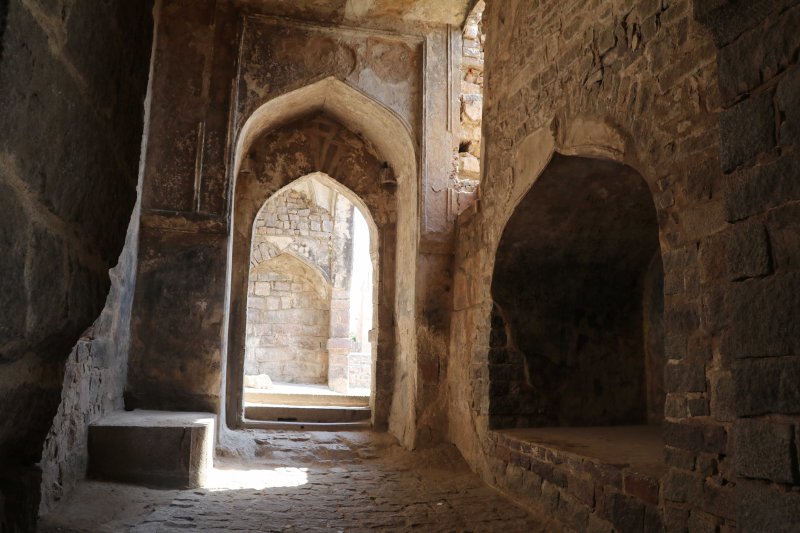