We all know about the sun temple in Konark, Odisha. But there is another amazing temple complex dedicated to Sun in western India. The Modhera sun temple in Gujarat. Modhera is situated 75km north-west of Ahmedabad near Mehsana; which is also the nearest railhead. This area was called Dharmaranya in the Solanki era and present day Patan was known as Anahilapataka – which was the capital of the Solanki kingdom. 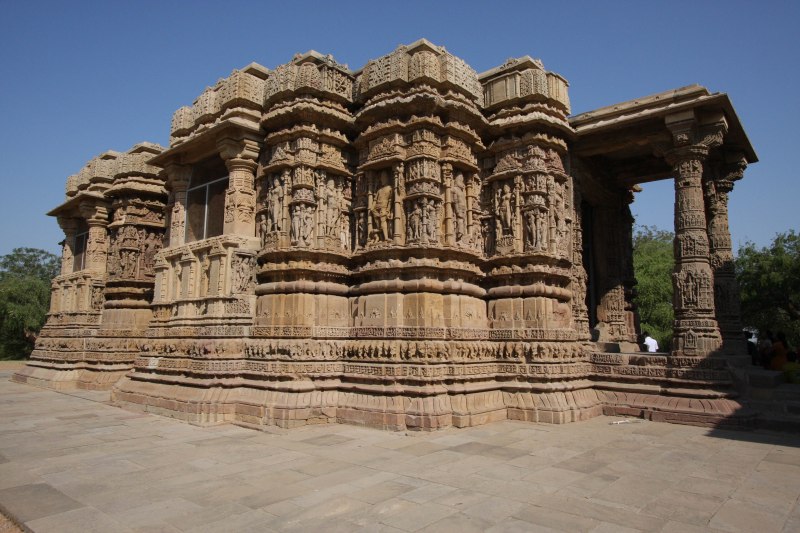 This sun temple consists of Gudhamandapa, Rangamandapa and a large tank built in line. This temple is popular internationally because of its sculptural embellishment. Every wall, panel and perhaps even pillar has beautifully carved images of gods, godesses, flowers, leaves, birds, animals. 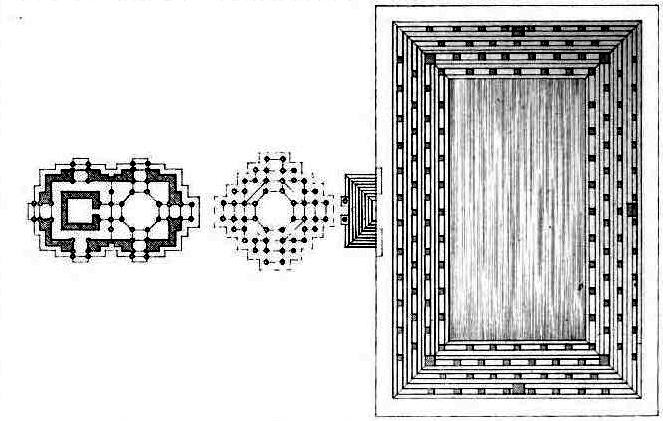 This region came under Solanki rule when King Mularaja defeated the Chavda king in the tenth century CE. Modhera was built during the reign of King Bhimadeva I (1024-66). The construction of the temple began in 1016 and was completed in 1017 CE. So about 990 years ago. 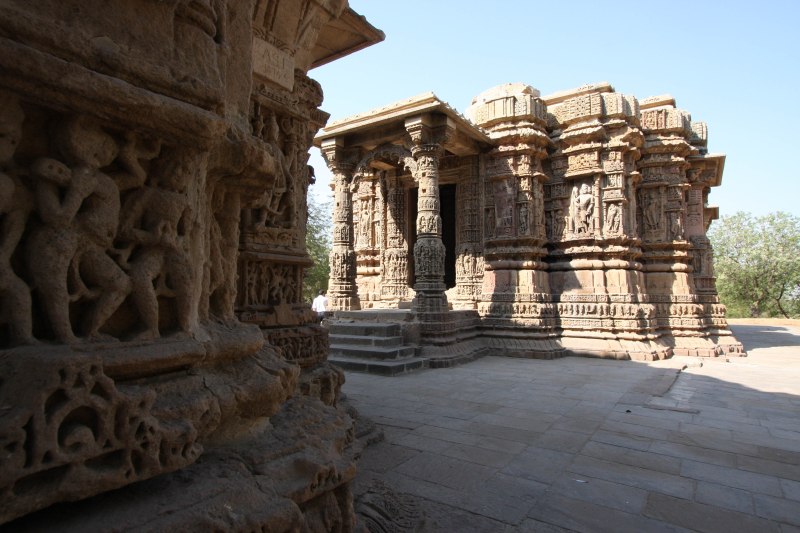 The temple spans around area of 11.5m x 9m and built in the yellow sandstone locally available in the region. Though the Shikhara of the temple has been destroyed we can still appreciate the structural grandeur of the monument and perhaps visualize how it would complete in its full form. The base is known as Pitha which is decorated with elephants. There are 12 Aditya statuettes, 12 Gauri sculptures and 12 Dikpalas on panels. It is also believed that Sun was worshipped as a form of Shiva.

I regret that when I visited the temple in 2008, I did not observe keenly and did not capture detailed images of these sculptures! Perhaps that gives me a reason to visit again … and it is not too far from Rani ki Vav which is now a world heritage monument. 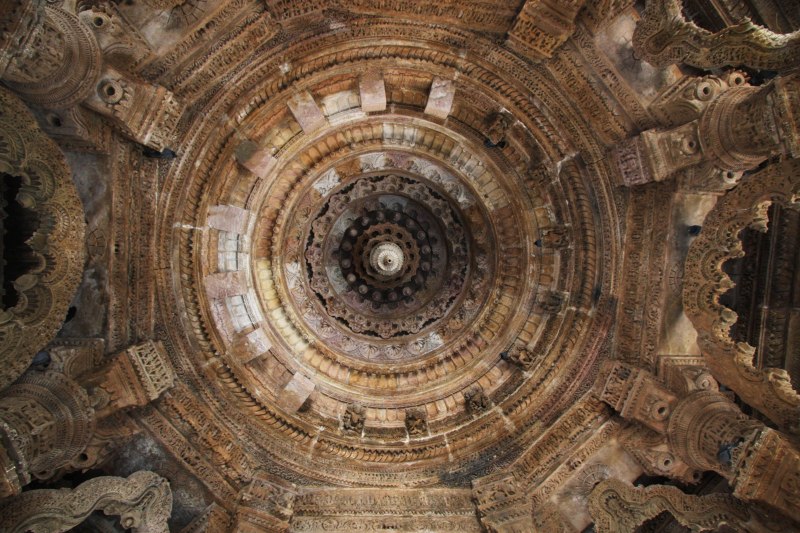 The ranga-mandapa or the dance hall seems like a later addition created as an after thought but fits geometrically well within the space between the gudha-mandapa and the tank. Perhaps the sub-soil water from river Pushmavati supplies to this tank. The tank has 4 terraces with tiered steps decorated with niches and shrines. 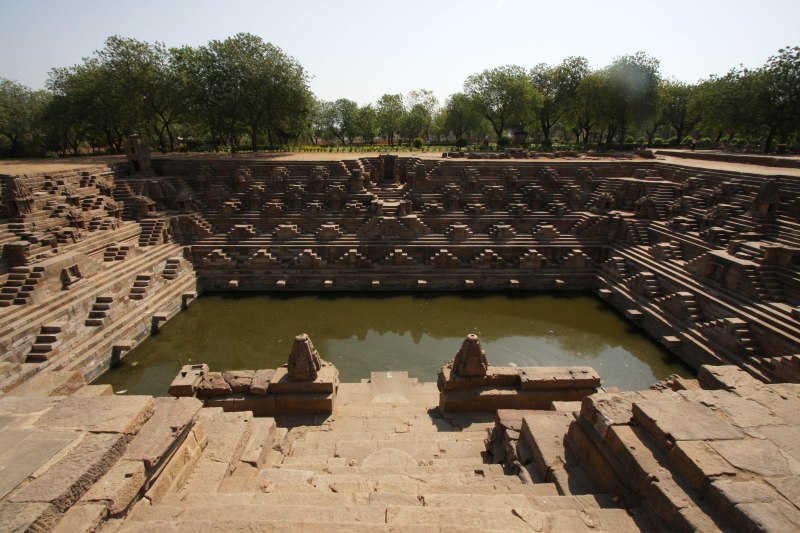 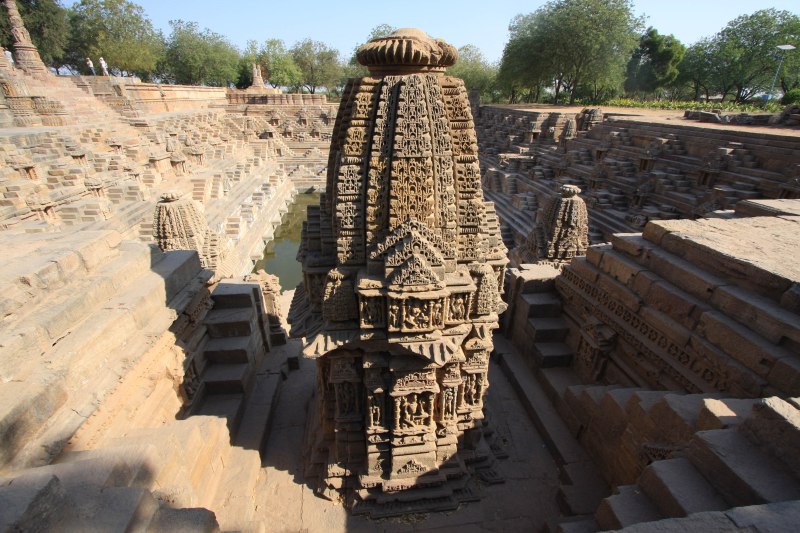 There are beautiful toranas inside Ranga-mandapa and carved dome roof. This temple was first visited in the recent times by James Burges and Henry Cousens. Today a heritage site under ASI. Gujarat is a vibrant place! so much to explore … Leaving you with a beautiful video with A R Rahman’s music … catch glimpses of Modhera in it!